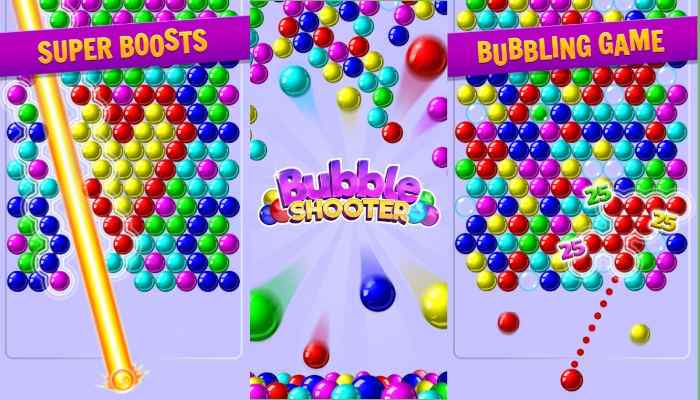 Popping bubbles are popular arcade puzzle games played widely on mobile phones. All of today’s games are inspired by the original title Puzzle Bubble, released in the 90s by Taito for arcades and consoles. Since then, several similar games have appeared that maintain the classic mechanics of shooting bubbles of the same color.

10 Best Bubble Shooter Games for Android to Play in 2021

Bubble Shooter™ is the official bubble shooter game from developer Ilyon, who owns the rights to the popular mobile franchise. As in all games of this type, you’ll have to hit two or more balls with a ball of the same color to solve the most diverse puzzles and clear the screen. This game has 3 game modes: Puzzle, Levels, and Classic. The game can be played anytime without having to be connected to the internet.

Bubble Shooter 2 is a pet-themed bubble popping game for Android. In this one, you’ll have to pop bubbles of the same color to free your trapped baby squirrels before your bullets run out. Throughout the stages, the puzzles get more and more challenging. The game gives you daily rewards, offers treasure chests, has over 500 levels, and allows you to send and receive lives from friends.

Bubble Game is also a casual Bubble Shooter game for Android phones. This title brings all the classic elements of a good bubble shooter game. The theme of this one is the magical world of dragons, in which you’ll have to pop bubbles to set them free. The game features a relaxing soundtrack and colorful and charming graphics. There are more than 520 levels for you to complete, and you can also play it when not connected to the internet.

Buggle 2 is a bubble popping game for Android that puts you in the middle of a battle between teddy bears and bees. In addition to the traditional Bubble Shooter mechanics, for a bit of variation, this game adds some characters. This is another bubble shooter game with cute and colorful graphics, accompanied by a fun soundtrack. The game features over 1300 levels full of challenging puzzles for you to solve and enjoy.

Frozen Bubble is a free bubble shooter game for Android, with no in-app purchases or ads. The fact that it is not monetized directly reflects the simplicity of the game. But it doesn’t make it a bad game, quite the opposite. It features an exciting soundtrack and very frantic casual gameplay. There are three fun game modes: Arcade, Puzzle, and Player 1 vs. Player 2 (which can be against the CPU, as well as a friend via Wi-Fi or Bluetooth).

Gameloft Classics: 20 Years is a super collection of classic games from the developer released for Android phones. There are more than 30 free retro titles gathered in a package. Among the most varied games, we have the classic Bubble Bash 2 and AbracadaBall, both bubble popping games. If you are from the time or just curious about retro gambling, this collection is a great choice.

7. Inside Out Thought Bubbles

Mind Fun is a bubble shooter game for Android based on characters from the Pixar/Disney movie of the same name. In this game, it is possible to unlock the most diverse characters of animation by playing over 1000 levels. As a bonus, the game features amazing 3D animations from the movie with the original voices of the voice actors. Each character has its own bonus special power. The game also features Facebook integration for ranking and donating lives.

Magnetic balls bubble shoot is a classic bubble popping game released for Android phones. As a differential about other Bubble Shooter games, this one adds physical elements of magnetic attraction. Thus, when you shoot a colored magnetic ball, it attracts the others, changing the more classic gameplay a little. There are more than 380 levels for you to overcome, various collectibles, infinite game mode, colorblind mode, and much more.

Bubble Shooter Polka Dot Games is the most successful classic game of its kind released for Android phones. With over 100 million downloads on Google Play, the numbers don’t lie. As in every bubble shooter game, you’ll have to match 3 or more bubbles with the same color to pop them. The game currently has an incredible 3000 levels, features daily rewards, leaderboard, colorblind mode, and more. Offers Arcade, Classic, and Levels mode.

SPOOKIZ PANG Bubble Shooting is the newest bubble popping game for Android. It features all the traditional mechanics of bubble popping games and comes with a monster theme. This game doesn’t need the internet to work and offers more than 1000 levels for you to enjoy. It also has no life limiters, so you can play as much as you like.

This is our list of the best bubble popping games for android. But as always, feel free to nominate the bubble shooter games you like in our reviews!