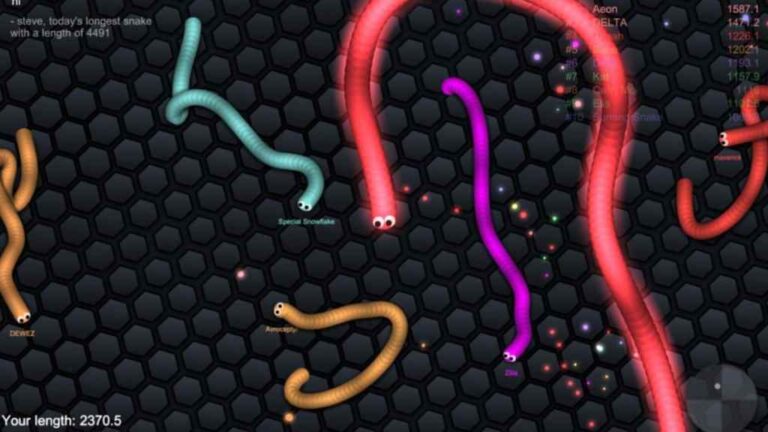 Want to know what are the best .io games for Android in 2021? Check out our super compilation that brings together in one place the best online multiplayer IO games available for Android mobile. Initially making a huge hit as casual hobby games for browsers, IO games soon multiplied and made the natural path to the Android platform. With so many options on Google Play, this list will help you a lot, see:

Agar.io is one of the most successful games when we talk about online IO games, on Android, it couldn’t be different. With over 100 million downloads, the Miniclip game remains the most popular IO game today. In this one, your mission is, like a bubble, to absorb players smaller than you while avoiding the bigger players. Thus becoming the biggest bubble of the match.

Slither.io, like Agar.io, is another addictive casual IO game that has captured audiences and famous streamers by going viral. The mechanics here are minimalist and addictive. As a snake, you will have to absorb players to be the player with the highest score in the match. Unlike Agar.io, crashing the snake’s head into the opponent’s body means “game over” for you, no matter your size. Greater snake extension allows you to make multiple body knots closing off your opponent’s exits, trapping him.

Hole.io is another IO game similar to Agar.io for Android phones. But the similarities lie only in the simple mechanics of absorbing the smaller ones and avoiding the bigger ones. In this title, the scenarios are in 3D and very interactive, as your mission, as a black hole, will be to absorb everything on the maps. In addition to swallowing smaller players, you’ll have to absorb from small objects to gigantic buildings and mountains to become the champion of the match.

Brutal.io follows the same proposal as Agar.io, however, it still adds a new mechanic. In this game, you control a cart with a flail (a sort of tail with an iron ball full of spikes) that can be hurled at enemies to destroy and absorb them. In other words, in addition to having to hit your enemies’ cart, you can’t be vulnerable and get hit by other opponents.

Deeeep.io Beta is another fun IO game for Android phones. In addition to being a casual online multiplayer all against all, this one simulates in a fun way the quest for survival in the aquatic biome. Here, you can transform into over 80 animals that have unique survival skills. In this game, the scenario is much more complex and interactive compared to more classic IOs that have a more minimalist proposal.

The Fidget Spinner.io Game, as its name reveals, is the casual online multiplayer IO game in which you play as a Fidget Spinner. Your mission will be to defeat the smaller Spinners to absorb them and become the biggest in the session on the server. The game has a wide variety of skins that, while not giving you an extra advantage, leave your spinner with your face. Collect coins and complete missions to earn various rewards and unlock spinners.

Goons.io is a casual online multiplayer game similar to Agar.io for Android phones. In this one, you play as characters armed with swords in three different game modes: Alone, Team, or Capturing the Flag. When you slice your opponents, they leave little dots that make your sword bigger and stronger. There are also several skins for customizing your character.

Paper.io 3D is another IO-style game for Android phones. In this game, as a sliding cube, you’ll have to paint areas of a small world in 3d. The one who fills the largest possible zone without being defeated by the opponent wins. If you were already into the 2D version of Paper.io, you will love this 3D version. By collecting stars while playing, reaching 100%, you will unlock new levels and bonuses.

Snowball.io is an all-on-all multiplayer casual game where only one win. In this IO game, you’ll have to form gigantic snowballs to throw at your enemies and throw them off the map. Additionally, as in all battle royales, the combat area gets smaller and smaller over time, making final confrontations inevitable.

Warbot.io is an IO game with well-crafted 3D graphics for Android phones. In this one, your mission will be, like a robot, to defeat your enemies in an arena full of special powers and improvements. In addition to the online multiplayer mode for up to 100 players simultaneously, the game also supports internet-free gaming. There are five different robot types, each with its own unique combat characteristics.

This is our list of the best .io games for Android. But as always, feel free to nominate your favorite .io-like mobile games in our comments!