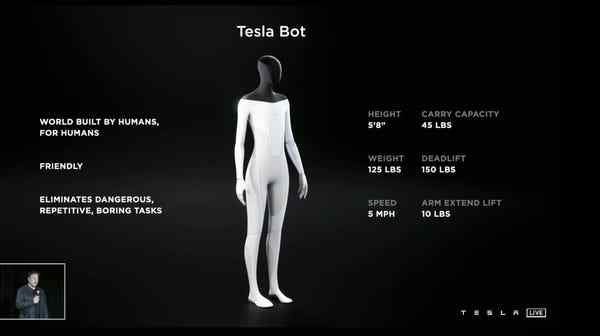 Everything You Need to Know About Elon Musk Tesla Robot

A humanoid? Yes, it is about Tesla Bot, the Elon Musk and Tesla robot announced by the magnate himself during the celebration, last August, of Artificial Intelligence Day, and today we tell you everything we know about him.

The new idea of ​​the founder and owner of the famous North American electric car company is to create a humanoid robot that helps people in “dangerous, repetitive and boring” tasks in the words of Musk himself. Apparently, Tesla has already begun work on the project, whose first functional prototype they hope to have ready for next year.

The Tesla Bot prototype will measure 1.75 meters tall and weigh about 57 kilograms. It will be able to move at 8 kilometers per hour and carry loads of approximately 20 kilograms. On the face will have a screen where you can read all the information related to it.

Likewise, it will work with the same artificial intelligence of the company’s electric cars: Autopilot will be in charge of giving life to the robot, which will have a system based on artificial recognition that will know how to identify what surrounds it in order to make the right decision according to what merit.

According to Musk, this robot will be able to do the shopping, screw bolts, move packages, among other tasks that, according to robotics specialists, require a lot of specialized and adaptable programming, since this humanoid will also receive verbal instructions. Another requirement that is added for natural language processing.

This Elon Musk robot represents a programming challenge for specialists in the field, because, in addition to making it physically resemble a human, it is also making it behave as such. So, we can only wait until next year to see if Tesla Bot becomes a reality and fulfills everything promised by its owner.