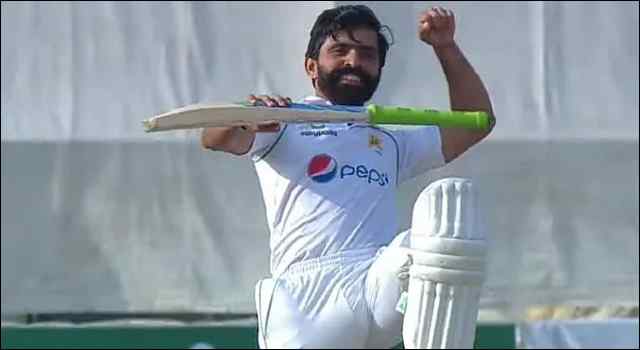 He made his Test debut in 2009 against Sri Lanka. He played an impeccable inning of 16 runs in his debut. But then mysteriously dropped out of the Test team. After a long 11 years, he got his second century on the field. Since then he has become impeccable. He is making a century in every series. Fawad Alam has also taken a place in the record.

Pakistan suffered a batting disaster in the second Test at Sabina Park in Kingston. When he came to the wicket, three Pakistani batsmen returned to the pavilion to score two runs. Babar formed a fierce resistance with Azam. He left the field with ‘injured retirement’ due to muscle strain near the turn of the century.

Fawad Alam has set an Asian record of 5 centuries by playing the shortest innings. He had to play 22 innings to play five centuries. So far this record was held by Indian batsman Cheteshwar Pujara who scored five centuries in 24 innings.

However, he returned to the field. Fawad Alam took the bat again after the 6th wicket fell. Nemesis picked up the fifth century of his career. In this, he took place in the record book.

Fawad Alam returned to the Test team after 11 years with a tour of New Zealand last year. He played an innings of 102 runs in the tour and said that he did not lose. He then scored two more centuries against South Africa and Zimbabwe. He scored the fifth century of his career in the current Kingston Test.