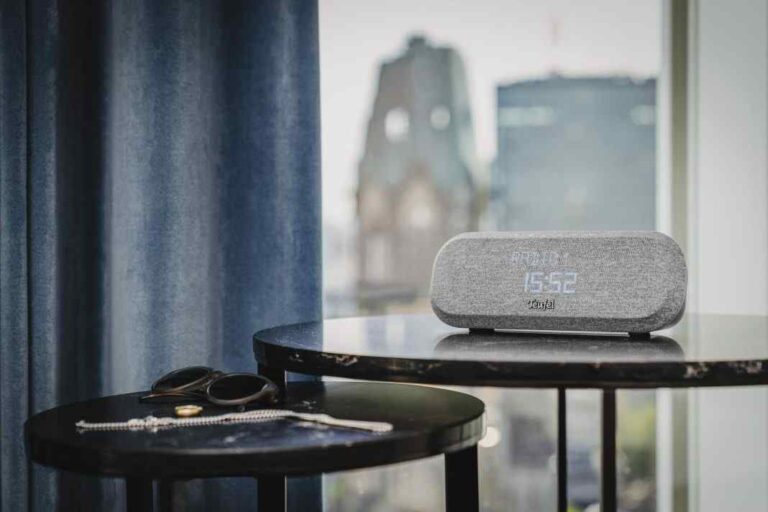 Teufel, the Berlin-based sound expert for 40 years, launches the RADIO ONE, its new designer smart alarm clock with high-quality sound, Bluetooth, and the latest news for your daily use. An alternative to the mobile alarm would be the lifelong alarm clock, but what if, in addition to announcing the time to get up, it also incorporated the latest sound news?

With the return to work and routine, it’s time to get back on track from the first hour. More and more people seek to limit the use of the mobile phone outside the office or during the hours of rest, which happens by not having it on the bedside table or using it as an alarm clock.

Anyone who has listened to radio alarm clocks inevitably thinks of poor, squeaky radio sound. In the case of the RADIO ONE, the sound is provided by two 2-inch full-range drivers slightly angled to the sides and a large passive diaphragm at the rear. Thanks to Dynamore technology, developed by Teufel in Berlin, the RADIO ONE turns the bedside table into a whole concert stage.

Features of Radio ONE by Teufel

The RADIO ONE receives the signal classically via FM or digitally via DAB +, with three station memories available for both reception methods. Teufel has placed the antenna almost invisibly at the bottom of the device, although music can also be transmitted via Bluetooth or by connecting an external player to its minijack input.

All the functions of the RADIO ONE are accessible through the buttons on the front of the device. Users will be able to find two independent alarm clocks, a sleep timer, buttons for Bluetooth, FM, and DAB +, and an extra-large screen to which the brightness can be easily adjusted. It also has several programs depending on personal habits and days of the week, such as the possibility of setting the alarm in advance for a specific date.

The new RADIO ONE smart alarm clock from Teufel is available in the colors Night Black and Light Gray at a price of 169.99 euros.