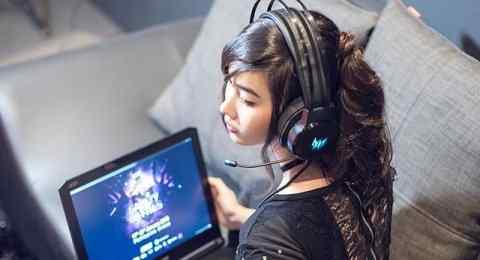 7 Richest Female Gamers Of All Time

Gaming is not merely an entertainment source after the boom in the gaming business. Many well-known gamers have a sizable fan base, which benefits them financially. Aside from men, professional female gamers have also proven themselves to be the best due to their exceptional abilities. Here, we’ll look at the richest female gamers & streamers, who have gained popularity among gamers and have filled their bank accounts as a result of their efforts.

Some of the most lucrative eSports tournaments are held in the gaming industry, with prize pools totaling millions of dollars each year. Female gamers make up a significant portion of this group. So, here are the wealthiest female gamers, who will astound you with their fortunes.

Kathleen Belsten, also known as Loserfruit (or simply Lufu), is an Australian YouTuber from Sydney. She was born on February 22, 1993, in Melbourne, Victoria. Her incredible Overwatch and Fortnite videos made her a YouTube sensation. In May of 2013, she became a member of the platform.

She was a member of the Click YouTuber collective, which included Bazza Gazza, Crayator, LazarBeam, Mrfreshasian, Muselk, Prestige Clips, Tannar, and Mully during her time on the platform. Kathleen is one of the wealthiest female gamers thanks to her large fan base on YouTube, Instagram, and Twitch.

One of the most popular Twitch streamers, DizzyKitten, is known for playing games such as Counter-Strike: Global Offensive and Super Hexagon. She occasionally shows dancing dolphins during her streams. She was first introduced to video games when she saw her brother playing World of Warcraft as a child.

Her first live stream took place in September of 2013. Following that, Dizzy grew in popularity among gamers and was named one of the wealthiest female gamers. According to sources, she earned more than $600,000 from a successful streaming career as of mid-2019.

Dizzy’s popularity on Twitch has resulted in numerous donations and partnerships. As a result, her net worth is expected to rise as she continues to work.

She has been accepted into Corsair’s Streamer Program. Her sponsorship as an Intel Brand Ambassador was announced in August 2017. Anne is one of the wealthiest female gamers due to her outstanding gaming career achievements and popularity.

AnneMunition took part in a competitive gaming event held at the White House in December 2016. By performing alongside other streamers, the goal of this event was to educate and encourage ACA sign-ups among the gaming audience.

Lily Ki, also known as LilyPichu, is an American Twitch streamer, musician, and YouTube personality who hails from California (born November 20, 1991). Lilly rose to fame in 2011 after the release of her song “I’ll Quit LoL,” which has over 6 million views on YouTube.

Animations, vlogs, songs, and piano covers make up the majority of her YouTube content. Her Twitch streams include League of Legends, as well as art, music, and real-life content. LilyRaichu (formerly LilyPi2) also uploads videos to her second channel on a regular basis.

She is well-known for her inventive videos, which has earned her the title of one of the wealthiest female gamers. Lily’s empathic personality causes her to frequently ask other streamers to describe their feelings, which may be considered inappropriate.

Rachel Hofstetter (born January 8, 1992) is an American YouTube streamer who goes by the online alias Valkyrae. She is also the owner of 100 Thieves, in addition to being a content creator. She signed a two-year exclusive contract with YouTube in January 2020, making her one of the wealthiest female content creators in the gaming industry.

Valkyrae holds charitable events in addition to its energetic and enthusiastic stream style. Despite the fact that Twitch is a male-dominated platform, Valkyrae has established herself as one of the most popular streamers. Valkyrae has become so popular on Twitch that she has given up her day job to devote her entire time to gaming.

She is an avid player of the PS4, Wii U, and Super Nintendo, and enjoys games such as Bloodborne, The Walking Dead, and Fortnite on her various recently-released game consoles.

Amouranth is a professional cosplayer who has also become a well-known Twitch streamer and social media personality. She is a costume designer in addition to modeling. In 2010, her work as a costume designer was noticed by the Texas Grand Opera and the Houston Ballet.

Kaitlyn began her cosplay adventures as a self-taught customer as a high school student in 2010. Her stunning appearance and captivating personality set her apart. When it comes to her romantic status, she is single.

Amouranth values fitness and keeps her body in shape because she has a large number of internet followers on various platforms, making her one of the wealthiest female gamers in the world.

The online celebrity Pokimane is a Moroccan Canadian who was born on May 14, 1996. Her Twitch and YouTube streams have made her famous. Pokimane (Imane Anys), an online gamer, is a streamer and celebrity. She first gained notoriety when she began broadcasting video game content on Twitch.

Any is considered one of the wealthiest female gamers due to her large social media following. She is a model for her clothing line, which includes t-shirts and sweaters, in addition to posing for her own products. She produces videos on the YouTube channel OfflineTV, which is run by a group of independent content creators.

Being a streamer and living alone, according to Anys, is illogical, so we decided to band together to stay in touch. We can deliver good content to everyone by working together and collaborating.

We hope you enjoyed our list of the world’s wealthiest female gamers. The reader’s valuable feedback is greatly appreciated. Please let us know in the comments section.