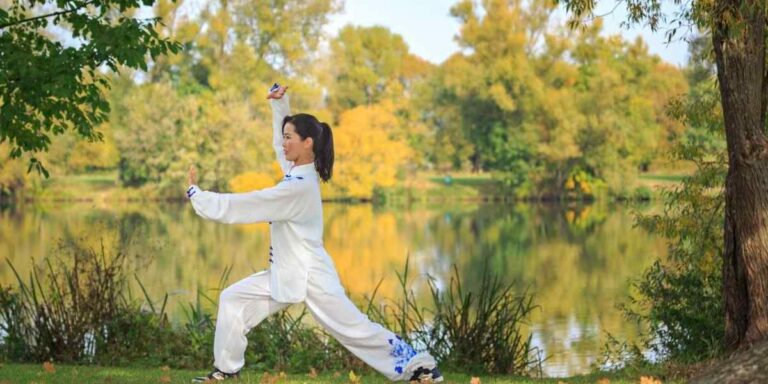 Let yourself be tempted by Qi Gong in this article. This centuries-old Chinese discipline works on breathing with its slow movement exercises. Discover with us the benefits on the body and the mind of the famous Qigong thanks to its 1000 methods.

What is Qi Gong?

The Qi Gong, which is pronounced “Chi Kung” is a Chinese discipline that passed through millennia along the lines of Indian Yoga. Recognized for its virtues on the well-being of its practitioners, there are today 3 currents of Qi Gong, namely the Taoist, the Confucianist, and the Buddhist.

Qi Gong’s movements are based on the mastery of breathing, as the two ideograms specify. Qi literally means breath or energy, and Gong expresses control or mastery.

Very similar to those of the Chinese martial art, Taï-chi-Chuan, the Qigong courses teach 1000 forms or methods inspired by the principles of Chinese medicine. Qigong for the general health of the body takes into account the meridians, acupuncture points, and the energetic physiology of the body and organs.

Introduced in the West in the 1970s, Qi Gong and its exercises are accessible to all age groups. In France, the Federation of Teachers of Qi-Gong energy art (FEQGAE) learns 3 principles based on slow and relaxed body movements, breathing techniques, and body language, as well as education in concentration.

The benefits of Qigong

The objective of this traditional Chinese gymnastics is to work on oneself at each morning Qi Gong session. The exercises thus stimulate the development of the condition, relaxation, breathing, and alleviate the state of stress.

To practice it, you can put on your karate kimono and follow the sessions on Youtube. You can also learn it with Qi Gong exercises. If you want to learn, know that there is Qi Gong for beginners. Anyone can practice this discipline: child, adult, motor or cerebral handicapped, physical condition is not a limit.

Qi Gong is also perfect for sports or artistic preparations. The work on the posture of the body and its perception contributes to better concentration and creativity. You can also learn medical Qigong with the static positions which improve vitality. With the movements of Tai Chi and Qi Gong, we develop the strength of muscles and joints.

There are even exercises that can make your face look beautiful with qigong. The 20 essential movements of qigong focus on the development of the energy body, to maintain health and balance the emotional state. Note that you can always do your session alone with qi gong videos.