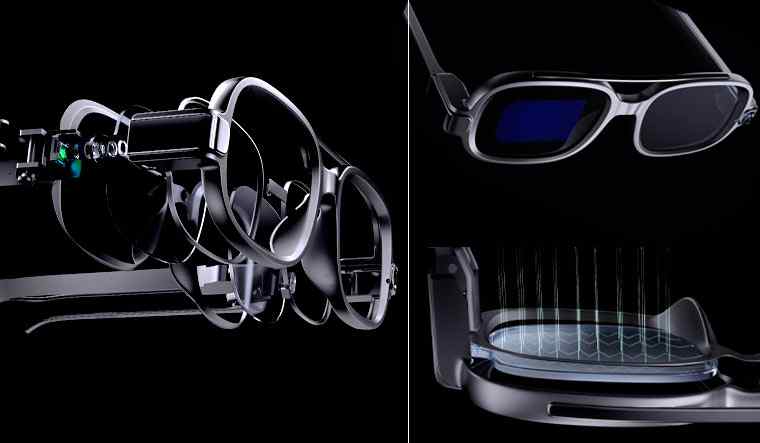 The Xiaomi Smart Glasses are official: It is a new smart wearable device that reminds us of the Huawei glasses presented a while ago. The new Xiaomi glasses combine an integrated imaging and sensor system in a simple and subtle design, thanks to MicroLED optical waveguide technology.

To fit the imaging system within the frame, MicroLED is certainly the perfect choice. Like OLEDs, the pixels of MicroLEDs are individually illuminated: thus, their emissive property allows for brighter screens and deeper blacks. But MicroLEDs have a higher pixel density and a longer lifespan while having a simpler structure. This makes a more compact screen possible, as well as easier integration of the same.

On the other hand, the Xiaomi Smart Glasses incorporate an image processor that measures only 2.4 mm x 2.02 mm. Under a microscope, the screen is roughly the size of a grain of rice, with individual 4μm pixels, allowing the screen to fit snugly into the frame of the glasses.

In order for the light to pass through the optical structures before reaching the eye, even in direct sunlight conditions, Xiaomi has opted for an ultra-efficient monochrome screen solution, capable of reaching a maximum brightness of 2 million nits.

The grating structure etched into the inner lens allows light to be refracted in a unique way, safely directing it towards the human eye. The refraction process consists of diffusing the light countless times, allowing the human eye to see a complete image and greatly increasing the ease of use when wearing the complete position.

All of this is done within a single lens, rather than using complicated multi-lens or mirror systems as other products do. Optical waveguide technology significantly reduces the size and weight of the device and thus allows smart glasses to come close to the design of traditional glasses.

Xiaomi Smart Glasses, as you can see, they are not virtual reality glasses, but they integrate a large number of miniature sensors and communication modules, so they are not a simple “second screen” for your smartphone, but rather they function as a new terminal. intelligent with independent operation capability.

In addition to basic notifications, call display, etc., you can also independently complete functions such as browsing, taking pictures, and translating the text into pictures. Considering usage, logical key interaction has also been implemented to minimize interruptions at inopportune times, and display important information on time when it’s critical.

The camera on the front of the glasses can also take photos and translate the text of the photos taken, which is very convenient when traveling. The indicator light next to the camera glows when the camera is in use to indicate that photos are being taken.

To achieve this high level of functionality, the glasses are equipped with a quad-core ARM processor, battery, touch panel, Wi-Fi / Bluetooth modules, Android operating system, etc. Even with all these features, the device only weighs 51 grams. All this makes it possible for Xiaomi Smart Glasses to conform to the shape of traditional glasses, but to surpass other existing smart glasses in functionality.

After Ray-Ban Smart Glass, Xiaomi introduces its new Smart Glasses, however, the company hasn’t revealed the release date of the glasses. Xiaomi Smart Glasses Price ranges from $200 to $300 USD.