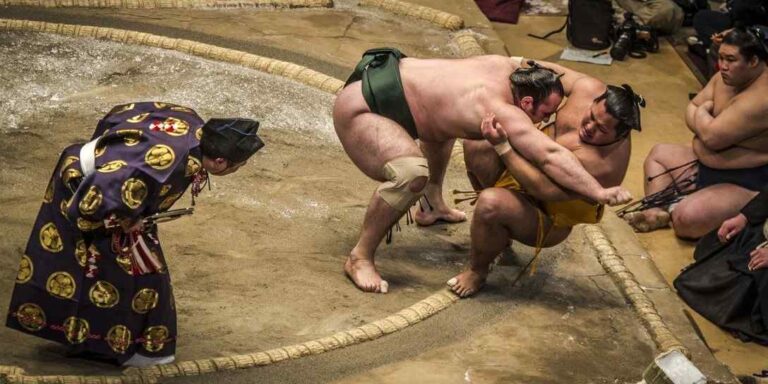 Sumo Wrestling: Things You Need To Know About Sumotori

Japanese culture is all about diversity. From manga to sushi to geishas not to mention ramen, the country is very rich in cultural diversity. This is the reason why each year, Japan attracts several thousand tourists from all over the world. The goal? Immerse yourself in the Japanese tradition and discover the different rites and customs. And who says tradition says especially sumotori.

When talking about Japanese folklore, geishas and manga are often mentioned. And in the culinary field, sushi and ramen take center stage. But we can’t talk about folklore without mentioning Sumotori, a martial art that pits two fighters of outstanding size against each other. This sport is the most popular in Japan and has been practiced for several centuries. In strong connection with Shintoism, it has testified to the originality of Japanese culture through the ages. According to reports, this sport even comes from a Japanese god.

You’ve certainly seen sumo in Japanese movies. And since Japan is the creator country of manga, producers have even dedicated sumo manga short films. But how was this sport created? Does it really come from the Japanese gods given that it is revealed to be a religious monument?

Sumotori is certainly a long-standing practice. And although it is a martial art, it is vastly different from any martial arts that we know. On the one hand, this practice is very selective since only a specific category of person can participate: the rikishi. Rikishi is a Japanese term used to refer to a sumo wrestler.

A young person wishing to make a career and forge a vocation in sumotori will have to devote himself to this art from his adolescence. He will thus integrate the heya, that is to say, a sumo stable where he will live in a community with other rikishi. He will have to follow a strict diet based on chankonabe, a stew rich in protein that will allow him to gain weight and muscle mass. The reason which explains why they weigh at least 140 kg. Like most Japanese, rikishi must submit to discipline. This will consist of cleaning their dorms, sweeping and raking the floor, and also getting up at 5 a.m. to start an intensive workout called Keiko.

Weight is not the only criterion that sets sumo apart. Rikishi is a wrestler, titans with feet as nimble as a ninja. How do they do? In the morning at five o’clock, during the workout, they are subjected to intense stretching. These stretches are done in groups and are meticulous.

How powerful a rikishi is also a matter of technique. And during his training, the rikishi must master the 82 holds that frame this sport. In a heya, there is also a hierarchy to respect. The younger ones are to serve while helping the older ones. In this momentum, they take charge of cooking the rice as well as all the household chores.

Moreover, like all other sports disciplines, sumotori has several ranks, more exactly 6. The highest ranks are the Yokozuna, but few are those who achieve this status qualified as being divine. Akashi Shiganosuke, Shiranui Dakuemon, Shiranui Kôemon, or even Jinmaku Kyûgorô are the greatest Yokozunas who have marked history. For your information, a sumo anime demonstrating a yokozuna in combat was released to screens a few years ago.

Sumos fight in a ring commonly called Dohyo in Japan. They face each other barefoot while wearing only a thong called a Mae-tate-Mitsu and a Mawashi (a belt). As for the hairstyle, tradition has it that a rikishi wears a bun that will differ depending on the rank. In addition, at the time of the fight, each wrestler must have his fighter name or Shikona.

The Basic Rules of Sumotori Wrestling

As mentioned above, sumotoris fight in a ring symbolizing the sky. Note that the Dohyô measures 6 m², but the fight takes place in a circle of 4 m placed in the center of the ring. And before the two wrestlers start to confront each other, they must submit to several rites. As a first step, since each fight honors the gods, it is essential that the rikishi cleanse his body and mind. He should also rinse his mouth with clean water and dry himself with a paper towel. When that is done, the confrontation can take place. The fight will end when one of the rikishi succeeds in pushing their opponent out of the ring circle.

Wearing a mouthguard is not necessarily necessary. Quite simply because within the framework of this discipline, the punches, the kicks above the hips as well as the strangulations are strictly prohibited. It is also forbidden to seize the opponent with his Mae-tate-Mitsu.

The practice of this discipline is not new. It dates back to the time of the gods and was first mentioned in 712 in the Kojiki. Later, sumotori would be used as an agricultural ritual and the fighting would go to the death since no hit was forbidden. In the 8th century, it was introduced into the heart of the imperial court of Japan but was no longer considered an agrarian ritual. On the contrary, it symbolized peace and prosperity. In the 9th century, it was officially declared to be a martial art. It then morphed into a developed form during the Edo period, which gave birth to modern sumo.