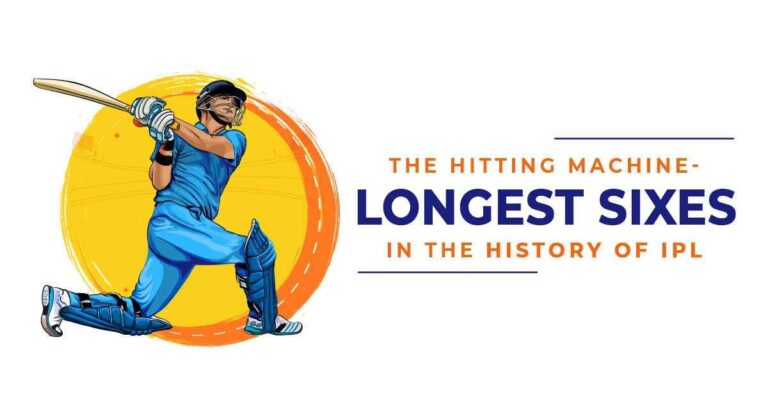 The Hitting Machine – Longest Sixes In The History of IPL

If you are a fantasy cricket enthusiast, you must keep yourself updated with cricket-related news. This will help you select the right players for your team and help you make important decisions at the last minute. Whether it is weather forecasts or sportsman injuries, you constantly need to read the news and make sure that you know everything. It would be best to take this seriously because fantasy cricket helps you win real cash prizes.

They are, of course, the best time pass you can ever think of. It gives you the perfect dose of an adrenaline rush, which is a blessing during these boring times when you hardly go out and party. Download an app and start playing IPL fantasy league to understand how thrilling it is.

Fantasy cricket has millions of fans across the globe, and that is because of the level of engagement it provides. There are so many tournaments that you can participate in, but if you are not sure of the rules, start with the free games. This way, you will not be risking your fund on the very first go.

Now coming back to sports news, in this blog, we will talk about the longest sixes in the history of IPL. As we all know, fantasy cricket is inspired by the IPL. It is made in the format of IPL, and you need to keep yourself updated for the same.

Now, who doesn’t enjoy watching IPL? Most people watch the game because of the batsmen. It is glamorous, coupled with Indian and foreign cricketers, and we also get to see sixes.

The quality of sports in IPL is fantastic. World-class players, as in power hitters and spectators, have given us many sixes to cherish! Here are some of the longest sixes that we often look back at.

6 Longest Sixes In The IPL History

In the year 2008, Albie Morkel made history. His performance against Deccan Chargers in Hyderabad is remembered by people who follow IPL. The South African all-rounder (take note, virtual cricket players) has hit one of the most extended sixes for Chennai Super Kings. He plunged Pragyan Ojha to his gigantic and impressive six! Fans went gaga after this hit.

Praveen Kumar just rocked it in 2011. He hit a 124-meter six against Lasith Malinga. It was unexpected. It made to the list of enormous sixes in the history of the IPL tournament. He is a medium pacer, and he made this excellent hit in 2011 IPL while playing for Kings XI Punjab. His career shone whenever he played in the IPL.

The third player that we will write about has a lot of fans. Yes, we are talking about the legend Adam Gilchrist. This Aussie player made a record with his 122-m long six in 2011. He made this while playing for Kings XI Punjab. Gilchrist was the captain of the Punjab side back then.

However, his record delivery was not a surprise because he has been a package throughout his career. He played for Kings XI Punjab and Deccan Chargers in his IPL career.

Yes, Uthappa and his 2010 six! All cricket fans remember the classic player and his performance. We do remember that. He was playing for Royal Challengers Bangalore.

He can bat like power hitters as well. He has maintained the fourth position on the list for years. He has also been a two-time IPL winner, with KKR or Kolkata Knight Riders.

We cannot complete the list without mentioning heart-throb Yuvraj. He is also known as the sixer king. His 119-meter-long six in the 2009 IPL is remarkable in the history of IPL Sixes. He was then the captain of the Kings XI Punjab team. Cricket fans still remember his smashing IPL performances.

Chris Gayle is also known for a massive six in IPL. He even has the maximum number of sixes in IPL. He is known for the IPL sixes record of 357 sixes. His longest IPL hit was in 2013 against Ashok Dinda of the Rising Pune Supergiants.

So these are some of the sixes that are worth mentioning. Other than that, we must mention Ross Taylor and his 119 meters feat in 2008. Moreover, Ben Cutting hit a great 117-meter six in 2016 for Sunrisers Hyderabad. Gautam Gambhir and Dhoni have also hit huge sixes in 2013 and 2009, respectively. While Gambhir managed to hit a 117-m for KKR, Dhoni got a 115-meter one. IPL and its history are wealthy, and you must make an effort to know it all if you want to win big in fantasy cricket! If you are a true cricket fan, you must have enjoyed reading this blog.

Watching IPL is fun but keeping a record at the back of your mind is vital for winning fantasy games. Since the pandemic is still here, with new variants emerging every few months, stay at home and learn how to play fantasy cricket.

And who knows? It can become a great way to earn extra bucks as well. The pandemic situation has been great for gaming manufacturers as well. To know about this, give this Forbes blog a read.

See More: All You Need to Know about Fantasy Cricket